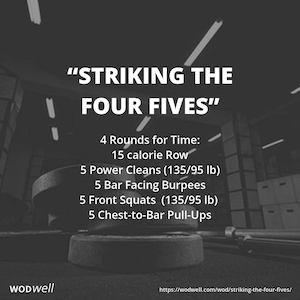 “Striking the Four Fives” is a Hero workout created to honor the US firefighters and police officers who lost their lives in the terrorist attacks on 9/11/2001.

(From WodWell:)
The workout draws its name from firefighter tradition and history. Before radios, pagers and phone systems, the New York City Fire Department used a series of bells and telegraphs to send signals to outlying firehouses. Each message would have a preset number of ‘bell strikes’ so the receiving firehouse would know what the message was based on the number of ‘strikes.’

When a firefighter died in the line of duty, Headquarters would send five bell strikes, repeated four times.

This tradition continues to this day, despite the fact that the bells have been replaced as a communication device. Signaling the death of a firefighter is now known as “Striking the Four Fives” and the practice has extended to fire departments across the US.

The significance of the rep scheme is four rounds of 5 reps (4 sets of 5) and the calorie row prefacing each round adds up to 60, which is the number of Port Authority and NYPD police officers killed on 9/11.

The workout was created by firefighter and athlete Buzz Wadsworth of Cynergy CrossFit (Hanson, MA, USA), who sought to honor the sacrifice made on that day.