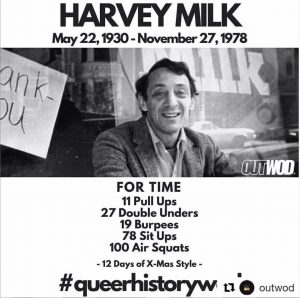 “Hope will never be silent.”

This week we honor Harvey Milk.

Harvey Milk was a visionary civil and human rights leader who became one of the first openly gay elected officials in the United States when he won a seat on the San Francisco Board of Supervisors in 1977. Milk’s unprecedented loud and unapologetic proclamation of his authenticity as an openly gay candidate for public office, and his subsequent election, gave never-before experienced hope to lesbian, gay, bisexual, and transgendered (LGBT) people everywhere at a time when the community was encountering widespread hostility and discrimination. His remarkable career was tragically cut short when he was assassinated nearly a year after taking office.

In one of his eloquent speeches, Milk spoke of the American ideal of equality, proclaiming, “Gay people, we will not win our rights by staying quietly in our closets. … We are coming out to fight the lies, the myths, the distortions. We are coming out to tell the truths about gays, for I am tired of the conspiracy of silence, so I’m going to talk about it. And I want you to talk about it. You must come out.”

Harvey Milk believed that government should represent individuals, not just downtown interests, and should ensure equality for all citizens while providing needed services. He spoke for the participation of LGBT people and other minorities in the political process.

The Harvey Milk Foundation is dedicated to realizing his vision of equality and authenticity for everyone, everywhere.

Then
Finisher
4 rounds, 30 on no rest
– Double KB cleans
– Run in place