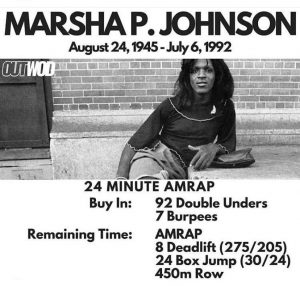 As an African-American trans woman, Marsha P. Johnson has consistently been overlooked both as a participant in the Stonewall uprising and more generally, #LGBTQ activism. As the broader gay and lesbian movement shifted toward leadership from white cisgender men and women, trans people of color were swept to the outskirts of the movement.

Despite this, following the events at #Stonewall, Johnson and her friend Sylvia Rivera co-founded the Street Transvestite Action Revolutionaries (STAR) and they became fixtures in the community, especially in their commitment to helping homeless transgender youth. STAR provided services — including shelter (the first was a trailer truck) — to homeless LGBTQ people in New York City, Chicago, California and England for a few years in the early 1970s but eventually disbanded.

At the age of 46, Marsha’s body was found floating in the Hudson River off the West Village Piers. The police initially ruled her death a suicide despite claims from her friends and others in the community that she was not suicidal. However, 25 years later, NYC Anti-Violence Project (@antiviolence) has re-opened this investigation.

We salute you, Marsha P. Johnson for your revolutionary activism, your bravery and for your story. 🏳️‍🌈