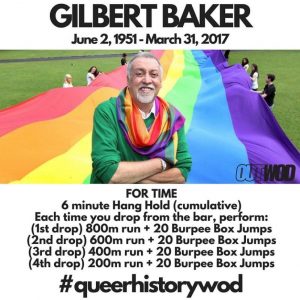 In celebration of Pride month we’ll be doing fun workouts from OUTWOD on Saturdays in June.

This week we honor Gilbert Baker. The 6 minutes in the WOD represent the 6 colors of the Pride Flag most widely distributed- even though the original has 8!

Baker set to work in 1978 to design the symbol for the gay liberation movement. He wanted it to be beautiful, unique, and to speak for itself as representative of the LGBTQ community. The very first pride flag was comprised of eight colorful stripes representing diversity: hot pink (sexuality), red (life), orange (healing), yellow (sun), green (nature), blue (art), indigo (harmony), violet (the human spirit). With help from volunteers, Baker filled eight metal trash cans with natural dye and organic cotton in the attic of the gay community center in San Francisco and used his sewing machine to stitch together the two initial flags that flew in the San Francisco Gay Freedom Day Parade on June 25th, 1978.

An artist until the end, just before his death, he created 39 nine colored flags which included “the eight original colors plus lavender to represent diversity in order to commemorate the 39th anniversary of the first rainbow flag,” so stated his obituary in the New York Times. On March 31st 2017 Baker died from hypertensive atherosclerotic cardiovascular disease in his New York City home at age 65. His life is celebrated in the documentary Rainbow Pride (2003) and his original sewing machine used to create the first flag is on display at The GLBT Historical Society in San Francisco.